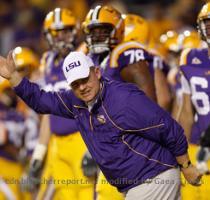 ARLINGTON (GaeaTimes.com)- Is Les Miles going to the new Michigan Wolverines coach? This is the latest buzz in the Louisiana State University Tigers camp after the team lost the Cotton Bowl last night to the Texas A&M. Texas A&M dashed the hopes of the Tigers as they crushed them by a score of 41-24 last night at the Dallas Cowboys Stadium in Arlington. LSU Tigers loss is proving to reap disastrous results as it is being speculated that following the loss of the Tigers the head coach of the team may shift to University of Michigan, his alma matter.

Although there is no official confirmation of the news but indications coming from Les Miles himself reveal that it is not unlikely for him to join hands with the Michigan Wolverines. On being questioned about the match prior to the Cotton Bowl game the head coach of the Tigers said that he is aware of the rumors and had even discussed them with his team. He strictly denied that there has been any discussion between him and the Michigan Wolverines regarding the issue of the head coach. He asserted that if there had been any conversation with the Wolverines he would have definitely told it to his team.

Michigan Wolverines are endlessly looking in for a new coach after they fired away Rich Rodriguez bringing a decisive end to his three year contract. They were also considering to hire Jim Harbaugh but to their dismay the ex-Stanford coach signed a deal with the San Francisco 49ers on Friday. Apart from Les Miles the Michigan Wolverines are also considering the name of Brady Hoke, the San Diego head coach.

Great whites ended up in Mediterranean after 'wrong turn' 450,000yrs ago

LONDON - A genetic study has suggested that the great white shark may have ended in the Mediterra...

LONDON - Overbearing mother-in-laws might be objects of fun for men the world over but for women, li...