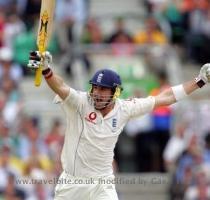 ADELAIDE, AUSTRALIA (GaeaTimes.com)- England emerged on top at the end of Day 4 of the 2nd Ashes 2010 test. With Kevin Pieterson smashing a double ton on the third day and almost eliminating the chances of an Australian win, the English bowlers have gradually tightened the hold on the Australian batsmen. Michael Clarke was the only Australian batsman who stood out on Day 4. His dismissal after scoring 80 puts a big question mark on Australia’s chances for a draw. Though rain seems to have got into the mix to intensify the drama., it looks like an uphill task for Michael Hussey and the rest of the Australian lower middle order on the penultimate day of the Aus Vs Eng test.

Michael Clarke, who provided the only hopes for a draw with his patient 80 was dismissed rather bizarrely off the bowling of Kevin Pieterson. Many cricket fans might not have seen the star batsman bowling, but the off cutter seemed to be well pitched and turning considerably. He landed a ball on the off stump that turned enough to get Michael Clarke into a mess and lobbed off the pads after a thick inside edge to Alistair Cook in short leg. Though the umpire adjudged not out, England appealed for a review and finally saw the danger man off. A positive to take for Australia so far in the tournament would be Michael Clarke’s return to form in the 2nd Aus Vs Eng test.

The pick of the bowlers for England, on the rain interrupted fourth day of the second Aus Vs Eng test, has been Graeme Swann. His relentless line and significant turn has fetched him the two crucial wickets of Ricky Ponting and Simon Katich.

NEW DELHI - India won 100 medals at the Commownealth Games, its higest in the Games' history, and ba...

NEW DELHI - Results of the eight events that were decided on the opening day of the Commonwealth Gam...

MOHALI, INDIA (GaeaTimes.com)- On the fourth day of the first test between India and Austral...
Copyright© 2010 The Gaea Times