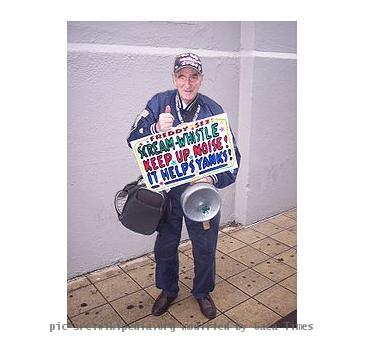 NEW YORK (GaeaTimes.com)- The New York Yankees game is never going to be the same again. Freddy “Sez” Schuman is no stranger to the die-hard fans of the Yankees given the fact that the 85-year-old sports enthusiast has been part of almost every game of the New York Yankees for the last 20 seasons. However, the Yankees games from now on would be different as far as the crowd support is concerned as the New Yorker died on Sunday after suffering a heart attack.

According to Chuck Frantz, who is a longtime friend of the New York Yankees supporter, Freddy “Sez” Schuman was hospitalized at the Lenox Hill Hospital on Friday night following a heart attack. After struggling with his life for two days, the ardent Yankees fan passed away on Sunday afternoon at the age of 85. While talking about the demise of the veteran sports enthusiast, his friend Chuck Frantz stated that “It’s a sad day for Yankee fans’ as well as for the people who knew him. He further went on to say the fact that supporters would now never hear Freddy “Sez” Schuman’s signature gesture of banging frying pan with a spoon to support his favorite team, has come as a shock to everyone.

All the ardent fans of the New York Yankees remember Freddy “Sez” Schuman for being present at almost every game of the team, walking around the stadium carrying posterboards that carried inspirational message for his favorite team. In 2004, the frying pan and spoon used by the Yankees supporter was put on display at the National Baseball Hall of Fame and Yogi Berra museum.