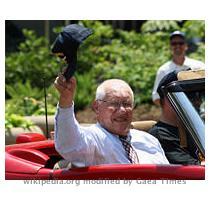 CLEVELAND (GaeaTimes.com)- Bob Feller, the Hall of Famer pitcher who is also regarded as the one of the very best right-handers in the history of baseball, passed away on Wednesday night after suffering from acute leukemia for quite a long period of time. The right-handed pitcher who had earned the nickname of ‘The Heater from Van Meter,’ ‘Rapid Robert’ as well as ‘Bullet Bob’ for his prowess over the game, was 92 at the time of his demise. The news of his unfortunate death has left all his ardent followers and people in the baseball fraternity devastated.

The news of Bob Feller’s demise has been confirmed by Bob DiBiasio, the vice-president of public relations of the team Cleveland Indians and he also revealed that the renowned Hall of Famer was shifted to hospice care about two weeks ago where he breathed his last night. In the month of August this year, it was announced that Bob Feller has been battling leukemia and over the last few months his health had worsened to a large extent. Since the news of the former Cleveland Indians player’s death has spread, condolences have been pouring in various quarters as Bob Feller’s colleagues are still trying to come to terms with the fact that the highly-acclaimed baseball legend has passed away.

While responding to the demise of Bob Feller, Commissioner Bud Selig said in a statement that he was extremely saddened by the unfortunate death of the Hall of Famer while adding that the baseball icon was one of the ‘game’s all-time great pitchers.’ For his illustrious baseball career, Bob Feller was inducted in the Hall of Fame in the year 1962.

MELBOURNE - Jon Bon Jovi is set to take the stage for 300 guests being flown out for Oprah Winfrey'...

LONDON - A Brit comedian spent his life savings after being told he had only three months to live - ...

If Aussies bring back Warne then England will bring back Trueman, jokes Botham

Help bob the farmer plant his field and fend off the animals that try to eat his vegetables....

NEVADA - In a remarkable interfaith gesture, clergy belonging to various religions and denomination...

LONDON - George W. Bush's "Decision Points" was billed as offering "gripping" account of his time in...
Copyright© 2010 The Gaea Times